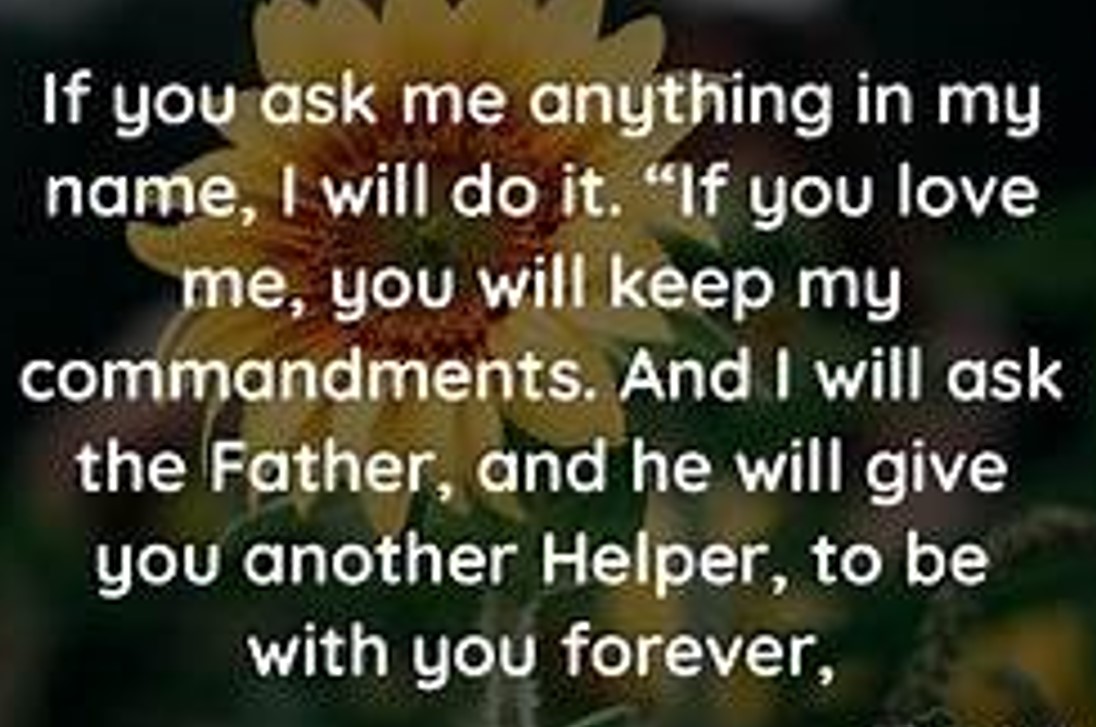 8 Philip said, “Master, show us the Father; then we’ll be content.”

9-10 “You’ve been with me all this time, Philip, and you still don’t understand? To see me is to see the Father. So how can you ask, ‘Where is the Father?’ Don’t you believe that I am in the Father and the Father is in me? The words that I speak to you aren’t mere words. I don’t just make them up on my own. The Father who resides in me crafts each word into a divine act.

11-14 “Believe me: I am in my Father and my Father is in me. If you can’t believe that, believe what you see—these works. The person who trusts me will not only do what I’m doing but even greater things, because I, on my way to the Father, am giving you the same work to do that I’ve been doing. You can count on it. From now on, whatever you request along the lines of who I am and what I am doing, I’ll do it. That’s how the Father will be seen for who he is in the Son. I mean it. Whatever you request in this way, I’ll do.

15-17 “If you love me, show it by doing what I’ve told you. I will talk to the Father, and he’ll provide you another Friend so that you will always have someone with you. This Friend is the Spirit of Truth. The godless world can’t take him in because it doesn’t have eyes to see him, doesn’t know what to look for. But you know him already because he has been staying with you, and will even be in you!

25-27 “I’m telling you these things while I’m still living with you. The Friend, the Holy Spirit whom the Father will send at my request, will make everything plain to you. He will remind you of all the things I have told you. I’m leaving you well and whole. That’s my parting gift to you. Peace. I don’t leave you the way you’re used to being left—feeling abandoned, bereft. So don’t be upset. Don’t be distraught.”

The Third Sunday after Pentecost

Almighty God, you have built your Church upon the foundation of the apostles and prophets, Jesus Christ himself being the chief cornerstone: Grant us so to be joined together in unity of spirit by their teaching, that we may be made a holy temple acceptable to you; through Jesus Christ our Lord, who lives and reigns with you and the Holy Spirit, one God, for ever and ever. Amen.

When the Lord was about to take Elijah up to heaven by a whirlwind, Elijah and Elisha were on their way from Gilgal. Elijah said to Elisha, “Stay here; for the Lord has sent me as far as Bethel.” But Elisha said, “As the Lord lives, and as you yourself live, I will not leave you.” So they went down to Bethel.

Then Elijah said to him, “Stay here; for the Lord has sent me to the Jordan.” But he said, “As the Lord lives, and as you yourself live, I will not leave you.” So the two of them went on. Fifty men of the company of prophets also went, and stood at some distance from them, as they both were standing by the Jordan. Then Elijah took his mantle and rolled it up, and struck the water; the water was parted to the one side and to the other, until the two of them crossed on dry ground.

When they had crossed, Elijah said to Elisha, “Tell me what I may do for you, before I am taken from you.” Elisha said, “Please let me inherit a double share of your spirit.” He responded, “You have asked a hard thing; yet, if you see me as I am being taken from you, it will be granted you; if not, it will not.” As they continued walking and talking, a chariot of fire and horses of fire separated the two of them, and Elijah ascended in a whirlwind into heaven. Elisha kept watching and crying out, “Father, father! The chariots of Israel and its horsemen!” But when he could no longer see him, he grasped his own clothes and tore them in two pieces.

2 In the day of my trouble I sought the Lord; *
my hands were stretched out by night and did not tire;
I refused to be comforted.

11 I will remember the works of the Lord, *
and call to mind your wonders of old time.

12 I will meditate on all your acts *
and ponder your mighty deeds.

14 You are the God who works wonders *
and have declared your power among the peoples.

15 By your strength you have redeemed your people, *
the children of Jacob and Joseph.

17 The clouds poured out water;
the skies thundered; *
your arrows flashed to and fro;

18 The sound of your thunder was in the whirlwind;
your lightnings lit up the world; *
the earth trembled and shook.

19 Your way was in the sea,
and your paths in the great waters, *
yet your footsteps were not seen.

20 You led your people like a flock *
by the hand of Moses and Aaron.

So he set out from there, and found Elisha son of Shaphat, who was plowing. There were twelve yoke of oxen ahead of him, and he was with the twelfth. Elijah passed by him and threw his mantle over him. He left the oxen, ran after Elijah, and said, “Let me kiss my father and my mother, and then I will follow you.” Then Elijah said to him, “Go back again; for what have I done to you?” He returned from following him, took the yoke of oxen, and slaughtered them; using the equipment from the oxen, he boiled their flesh, and gave it to the people, and they ate. Then he set out and followed Elijah, and became his servant.

2 All my delight is upon the godly that are in the land, *
upon those who are noble among the people.

3 But those who run after other gods *
shall have their troubles multiplied.

4 Their libations of blood I will not offer, *
nor take the names of their gods upon my lips.

6 My boundaries enclose a pleasant land; *
indeed, I have a goodly heritage.

7 I will bless the Lord who gives me counsel; *
my heart teaches me, night after night.

8 I have set the Lord always before me; *
because he is at my right hand I shall not fall.

9 My heart, therefore, is glad, and my spirit rejoices; *
my body also shall rest in hope.

10 For you will not abandon me to the grave, *
nor let your holy one see the Pit.

11 You will show me the path of life; *
in your presence there is fullness of joy,
and in your right hand are pleasures for evermore.

For freedom Christ has set us free. Stand firm, therefore, and do not submit again to a yoke of slavery.

For you were called to freedom, brothers and sisters; only do not use your freedom as an opportunity for self-indulgence, but through love become slaves to one another. For the whole law is summed up in a single commandment, “You shall love your neighbor as yourself.” If, however, you bite and devour one another, take care that you are not consumed by one another.

Live by the Spirit, I say, and do not gratify the desires of the flesh. For what the flesh desires is opposed to the Spirit, and what the Spirit desires is opposed to the flesh; for these are opposed to each other, to prevent you from doing what you want. But if you are led by the Spirit, you are not subject to the law. Now the works of the flesh are obvious: fornication, impurity, licentiousness, idolatry, sorcery, enmities, strife, jealousy, anger, quarrels, dissensions, factions, envy, drunkenness, carousing, and things like these. I am warning you, as I warned you before: those who do such things will not inherit the kingdom of God.

By contrast, the fruit of the Spirit is love, joy, peace, patience, kindness, generosity, faithfulness, gentleness, and self-control. There is no law against such things. And those who belong to Christ Jesus have crucified the flesh with its passions and desires. If we live by the Spirit, let us also be guided by the Spirit.

When the days drew near for Jesus to be taken up, he set his face to go to Jerusalem. And he sent messengers ahead of him. On their way they entered a village of the Samaritans to make ready for him; but they did not receive him, because his face was set toward Jerusalem. When his disciples James and John saw it, they said, “Lord, do you want us to command fire to come down from heaven and consume them?” But he turned and rebuked them. Then they went on to another village.